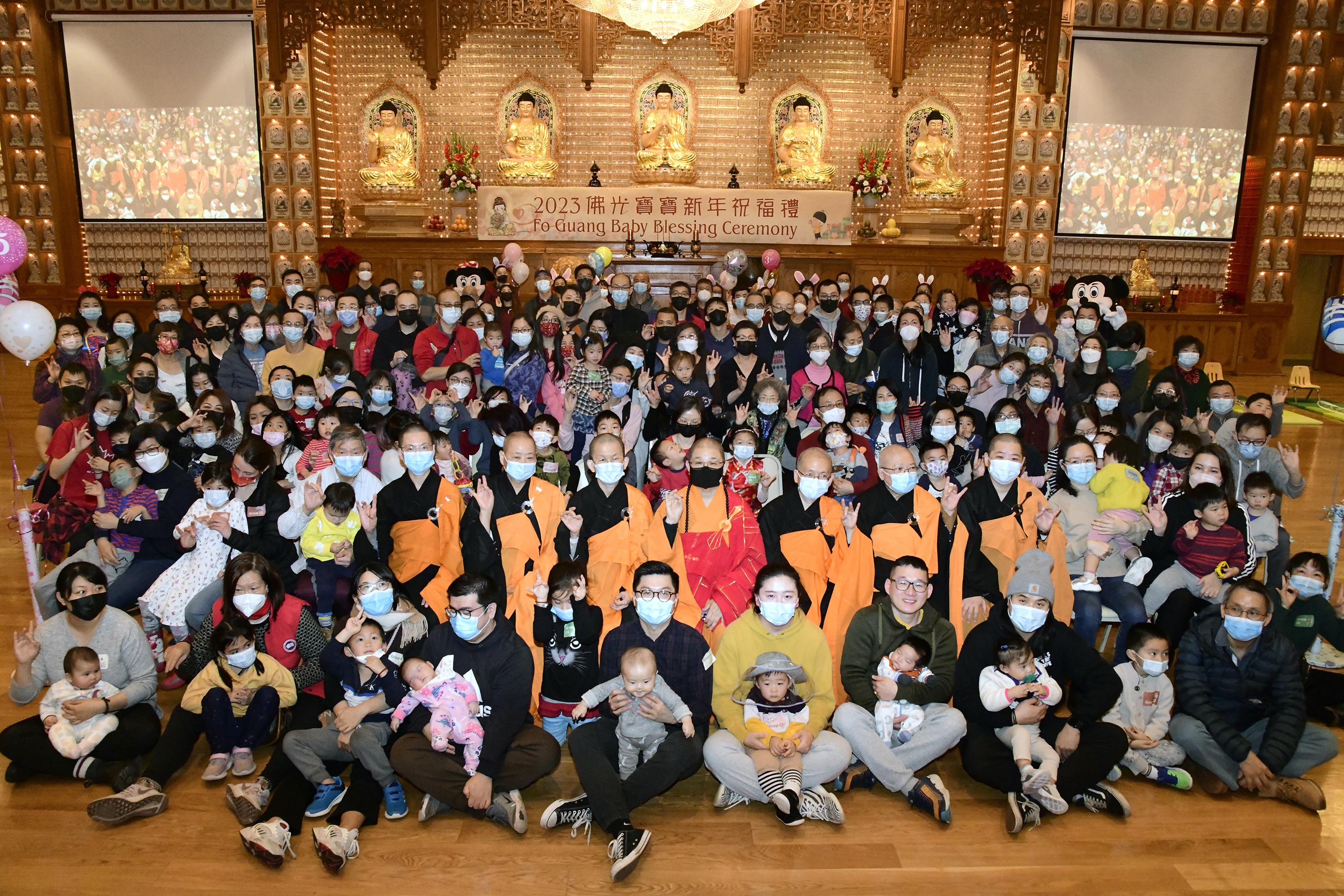 On New Year’s Day of 2023, FGS Temple of Toronto held the 2023 Fo Guang Baby New Year’s Blessing Ceremony. Parents took their children to the temple at the beginning of the year to receive the blessings of Buddha and the wishes from the venerable in hopes for their children’s physical and mental health, their safe growth, and their connection with the righteous Buddhist faith.

The poster for the Fo Guang Baby New Year’s Blessing Ceremony was sent out in early December of 2022. Fo Guang members rushed to tell relatives and friends about the ceremony, and the number of registered babies continued to increase. There were 61 babies/children aged 0 to 6 years old, accompanied by over 150 fathers, mothers, grandfathers, and grandmothers who attended the ceremony. The blessing ceremony also attracted devotees who came to the temple to pay respects to the Buddha and to attend the ceremony.

Venerable Chueh Fan, the Abbess, first explained the origin of the Fo Guang Baby New Year’s Blessing Ceremony. The ceremony is for satisfying the common wish of parents all over the world that their children grow up safely, healthily, and happily. After the COVID restriction was lifted, it became imperative for the FGS Temple of Toronto to hold the Baby Blessing Ceremony on New Year’s Day of 2023. The procedure of the ceremony consisted of reciting sutra and the “Prayer for the Fo Guang Baby” written by Venerable Master Hsing Yun, purifying and blessings, and presenting gifts.

The temple collected and edited the photos provided by Fo Guang youths who are now married and working in their professional careers; then a short video called “Buddha’s Light Shines Universally - Growing Up in FGS Temple of Toronto” was played during the ceremony. The adorable video recorded the children who have been exposed to Buddhism from a very young age who have grown up in the FGS Temple of Toronto. Those children are optimistic, intelligent and willing to learn and provide services. The video helped parents to understand that children who study Buddhism will not turn out to be misguided as well as the importance of passing on the faith.

After the blessing ceremony, six games were prepared for parents and children of different ages: Snatch the Prize, Eye on the Prize, Where am I, Musical Chairs, Guess What, and Shoot the Hoop. With the help of the Chinese school teachers and the Fo Guang volunteers, parents and children enjoyed the games and the Main Shrine became a warm playground with laughter everywhere.

Besides providing a delicious lunch for everyone, the Dining Hall also has a photography zone where people can take photos of the whole family. At the same time, there were volunteers in Mickey Mouse and Minnie Mouse costumes walking around, giving people happiness and adding joy to the ceremony.